If ever there were an example of what can happen when imagination meets determination, Fryer’s Cove Vineyards would be it. Located about 300km from Cape Town up the West Coast, this is a vineyard that never should have been. Why? Well, because pretty much everything counted against it. For starters, it’s incredibly small – as in only four hectares currently under vine, with the option of expanding to just six. An international rugby field is about a hectare, so that’s how small we’re talking here. There is practically no rain – as in only 50mm a year on average. Consider that a teacup is 250mm and you’re starting to get the picture.

And because that’s not enough of a challenge, the area also gets hammered by the elements – as in pervasive southwesterly winds year round. And then there’s its proximity to the ocean – as in a mere 500m from where the cold Atlantic throws its breakers against a rocky shore, sending sea mist and spray onto the vines. And yet, in spite of all these challenges, Fryer’s Cove has emerged as one of South Africa’s top premium Sauvignon Blanc producers, producing small-yield wines of staggering quality.

The story of Fryer’s Cove started way back in 1985 when Elsenburg student and aspirant winemaker, Wynand Hamman, visited the Strandfontein area. Fast forward through 14 years of dreaming and planning to 1999, which saw the first vines being planted. But Wynand and his fellow adventurers (and now in-laws), Jan and Ponk van Zyl, knew they needed more land if this were to work. They got it the following year, when they managed to secure 10 hectares from the Laubscher brothers (who’d been farming in the area for generations) in exchange for shares in their venture.

Ground water was too salty for irrigation and desalination prohibitive. But, typically, this challenge too was not too big to overcome. Jan simply built a pipeline across three farms (with permission of course) to bring water all the way from Vredendal – a mere 30km away… The cellar was established in what used to be a fish processing plant before the bottom dropped out of the West Coast crayfish industry in the 1970s. It’s arguably the cellar closest to the sea anywhere in the world! They decided to make it work for them, cleverly opting to pipe the icy cold water of the Atlantic through their tanks to keep their wine cool. And so Fryer’s Cove was born.

I love stories like these. Adversity, grit, passion – all the good stuff – and I think you can taste it in their wines. I had the privilege of a paired tasting of all the new release Fryer’s Cove wines a while ago and what a treat it was. 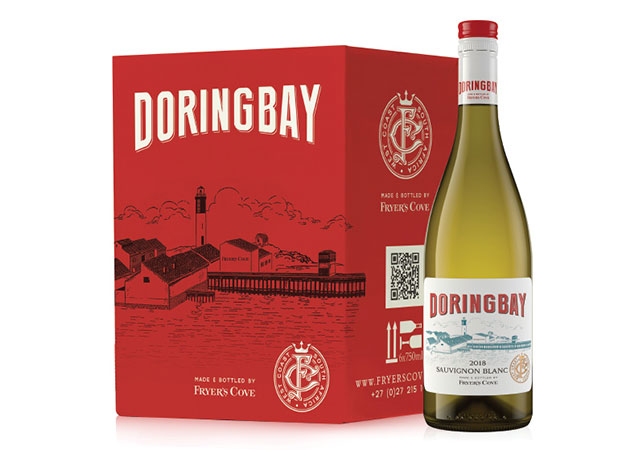 First up was their Doringbay Sauvignon Blanc 2018. Think of this as their ‘everyday’ wine, though at R95 (online, at time of publication) it is of course very much a high-end everyday SB. It’s fresh and crisp, with green notes as well as tropical fruits and it’s utterly luscious. Others think so too, because their 2017 positively groans under all the awards it’s been given. The Doringbay label has been given a makeover. I love the new shouty red type and image of the jetty at Doring Bay, home to the Fryer’s Cove winery.

The Sauvignon Blanc 2017 followed. It’s a premium SB, bottle-aged before release, and good to keep for quite a few years if you’re so inclined. (I battle to do that.) Fryer’s Cove considers this one of their best SB harvests in quite a few years, with a long dry ripening period with cold nights. On the nose of this wine there is a herbaceous quality as well as plenty of tangy passion fruit and a subtle flintiness. On the palate this translates into exquisitely ripe citrus, stone fruits and lemongrass. Only 16 846 bottles were produced and each one is individually numbered, with the box sealed and signed by the person who packed it.

Next up was their flagship/Rolls Royce/top-of-the-pops Hollebaksstrandfontein Sauvignon Blanc Reserve 2016. (Ten points to you if you can say Hollebaksstrandfontein three times fast!) Oak and clay pot fermented, it has an intensely rich, almost creamy palate and profound minerality with lemon, citrus, white flowers and some hay. It blew me away. The terroir at Fryer’s Cove is so unusual that it’s been given its own wine ward, Bamboes Bay – the smallest ward in SA. A glance at the label reveals the words ‘Wine of Origin Bamboes Bay’ to be printed considerably bigger than either the name of the wine or the vineyard. I would too, if my wine were the only one in the world that may display this!

This is a SB made for treasuring. It’s not released before it’s been in the bottle for at least a year and a half, and will continue to improve for 5-7 years. Only 2,034 bottles were produced and once again each is individually numbered. If you’re looking for a Christmas present for the man/woman who has everything, a box of this would go down nicely. Oh, and did I mention a personal note from the winemaker would be in the box? 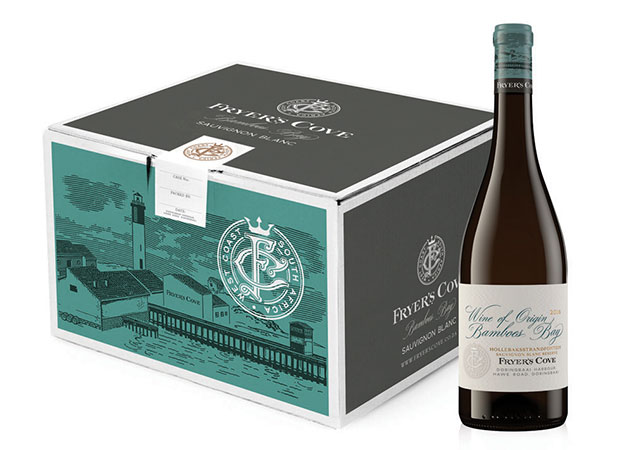 Hollebaksstrandfontein Sauvignon Blanc. Their flagship SB is worthy of superlatives.

Finally I tasted their Pinot Noir 2017. As with the SB, this was a super year for their Pinot harvest, albeit off a smaller volume thanks to pesky hungry birds. I adored the incredibly pale red of this Pinot – and my adoration did not end there. This delight has earthy mushroom-y aromas along with faint floral notes of rose and violets, plus cherry and cranberry. On the tongue there is lush red fruit and a gorgeous acid balance. Only 3 940 of these were produced, quite a feat considering that only half a hectare is planted with Pinot.

If you’re lucky enough to be making your way up the West Coast, do pop in to Fryer’s Cove. There’s a restaurant right on the jetty. It’s 70% owned by the local community with administrative support supplied by Fryer’s Cove. On the menu you will find West Coast favourites like roosterkoek, kerrievis and snoekkoekies.

As a small-output premium producer, you won’t find Fryer’s Cove on your supermarket shelf. For that you’d need to pop in to your nearest fine wine merchant. Or take the easy route and order it online directly from Fryer’s Cove. Christmas is coming, and I cannot think of a better gift than a box of one of these wines. They’ve gone to extraordinary lengths to ensure that their new packaging reflects the quality of their wines. And of course there’s that personal note from the winemaker in the box. Such a nice touch.