Baking bread is just about one of the most satisfying things I can think of doing in a kitchen. Short of eating it, that is. And it doesn’t come much easier than gorgeous focaccia. Buy one in a shop and you need to take out a second mortgage. I don’t get it because, really, the ingredients are super cheap and there is seriously no special skill involved in churning out focaccia. All it asks for is time to prove.

I’ve tried many focaccia recipes over the years because I’ve been searching for the ideal one with just the right texture outside and in. Paul Hollywood’s was one of them. Now he may be Britain’s baking rock star and he may have gorgeous blue eyes, but his was too doughy for my taste and just a bit too soft. I tried Jamie’s too. Same result. To be sure focaccia is not meant to be rock hard, but I do want a teeny, tiny little something to sink my teeth into.

So I kept on trying. And then I stumbled upon the focaccia recipe by quirky American TV celeb chef, Anne Burrell, and found out what was wrong with all the others I had made. What’s the secret? Turns out it’s olive oil. She uses wayyyyy more of the good golden stuff than any other recipe I’d tried before – as in an entire cup! Anne says the idea of focaccia is that olive oil is the star. After having made this numerous times I heartily agree! Inside this focaccia has a gorgeous non-stodgy open texture with lovely large yeast holes. And underneath there is a crunchy delicious olive-oil soaked crust. This is the closest I’ve ever come to my idea of the ideal focaccia. It’s my new go-to. Thanks Anne!

Combine the lukewarm water, sugar and yeast in a bowl and allow it to stand in a warm spot for a good 15 minutes to give the yeast time to activate and start bubbling. Now if you have a food mixer, things get super easy. Fit your mixer with its dough hook and, with the speed on low, mix together the flour, tablespoon of salt, half a cup of the olive oil and the yeast mixture. Once it starts coming together, let your mixer continue to knead it for 6 minutes. (You can do this by hand if you do not have a mixer, it’s just not the most pleasant kneading experience as this is a very tacky dough. But it still works.)

Tumble the dough onto a lightly floured surface and fold it over a few times. Then pop it into a large bowl lightly painted with olive oil, cover with cling film or a damp towel and leave to prove for an hour until it has doubled in size.

Pour the remaining half a cup of olive oil into a flat baking tray (the kind you would use to make a Swiss roll) and tumble the dough onto the tray. Use your hands to gently stretch it out to fill the pan then turn the dough over so both sides are well coated with oil. Use the tips of your fingers to push deep holes into the dough – this will create that lovely dimpled surface on the focaccia once baked – and set aside to prove for 40-60 minutes until it has doubled in size. Push rosemary into the focaccia and sprinkle generously with flaked Maldon salt. It is necessary to add this extra salt on top as the bread will be under-salted if you don’t. Bake in a pre-heated 220 degree Celsius oven for 25-30 minutes until it’s golden brown. Tuck in!

A few notes on proving bread

The warmer it is, the faster dough will prove. But when I say “put it in a warm place” I mean pleasantly mildly warm – as in a room with no draft. Not in the sun, not in a warming drawer. And certainly not in the oven. If it is cold as a dog’s whatnot outside and only 15 degrees inside, it will still prove. It will just need a little bit longer. So treat it like a pimple and leave it the hell alone. Have an extra cup of tea while you wait.

1) Push some pipped black or green olives into the dough.
2) Top it with a bit of very finely sliced red onion.
3) Or even some anchovies. Which takes it dangerously close to the French pissaladiere space. But why not? It’s your kitchen and you can do what you want to.

Focaccia may be Italian, but crusty bread with loads of olive oil and rosemary somehow immediately makes me think of lazy days in Provence. Which naturally makes me think of Rosé. Drum roll for the 2018 De Krans Pinotage Rosé which was released at the start of April. Now you may be familiar with the fact that we’ve had the most suicidally dreadful drought in the Cape and it has been one of the toughest harvests in a long time, if not ever. So I greet the release of 2018 with some relief. As I am sure the winemakers do!

This pale pink dry Rosé is packed with red fruit flavours and has a balanced acidity, resulting in a burst of freshness. On the nose you’ll pick up soft elegant rose petals, candy floss and hints of strawberries.

I may think of Rosé as a quintessentially summer wine – but I drink it all year round! At time of publication this Rosé is retailing at the R65 mark. Or get it online from the estate. A lovely sip indeed. 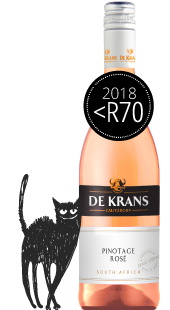