Chicken salad with an Asian twist

I love the occasional kitchen challenge, so when the friendly folk from SABC3’s Expresso morning show asked if I’d come make a salad on tele, naturally I said yes.

Where’s the challenge, you may ask? Well, apart from trying not to fall flat on my face/set their envy-inducing kitchen alight/or, like Nicki Minaj at the MTVs, drop the f-bomb (though in my case it would be entirely accidental), I also had to incorporate fruit juice in the recipe.

Now fruit juice in a salad dressing is a no-brainer. Think fennel and orange salad with an orange vinaigrette, or duck salad with a raspberry vinaigrette.

But, with me insisting on viewing it as a bit of a challenge, I rather wanted to transform it. So I took some apple juice and laced it with loads of cheeky ginger and chilli, then boiled it until thick and syrupy. I used it to coat chicken strips, then tossed them in sesame seeds and into a sizzling hot pan they went. Here it is: my Asian-inspired slightly-sticky-chicken salad – sweet, sour, salty and hot. Delish and so healthy it hurts my eyes. I may just have to follow it up with some ice cream to restore the balance.

Pour the apple juice in a small saucepan, add the thumb of ginger and quarter chilli and boil, uncovered, until the juice has reduced to 3 tablespoons and is thick and syrupy. (Reserve 1 tbs of the apple juice reduction for the salad dressing.) Toss the chicken in the remaining juice reduction. Remove, sprinkle with salt and coat with sesame seeds.

Fry in vegetable oil until golden and cooked through. As the chicken is thinly sliced, it takes mere minutes. (Take care not to stir the chicken or too much of the sesame seeds will come off. Fry until golden on one side and then flip over.) Add any remaining apple reduction that you tossed the chicken in to the pan towards the end of cooking. Remove chicken and set aside. Mix dressing ingredients. Toss veggies together, top with chicken, scatter over cashews and serve with the dressing.

You can replace the chicken with beef strips, turkey or prawns. Or go veggie and leave the meat out altogether.

To make this a more substantial meal, wrap this salad in some rice wrappers. Available at most big supermarkets, they look like sheets of glass. But soak then in water for just a few seconds and they turn snow white and soft. So gorgeous to wrap fresh, spicy things up in.

As this salad has a bit of a bite, I would choose quite a fruity white. My choice with this is a cheep and cheerful Chenin Blanc.

I found a bottle of Perdeberg’s 2014 Chenin at my local supermarket for under R35. I was not disappointed.

This is definitely one of the better seriously affordable 2014 Chenins out there. Buy more than one! 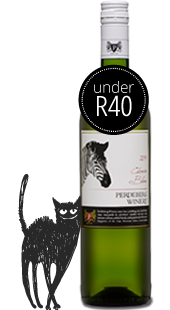