Baby marrow (aka courgette/zucchini) spaghetti… It’s the food equivalent of a bottle blonde with saline implants – not the real thing. But as many a Hollywood starlet has proven, done well, fake can be fabulous.

We revere carbs here at M&M and pasta made of anything other than wheat and egg is unthinkable. But I get that there are those of you who don’t. I’m happy to suffer for you, Dear Reader, so I took fake for a spin. The cooking directions on the back of the bag of Woolies baby marrow spaghetti were simple. Pop it in the micro for four minutes, let it rest for two and you’ll be in carb-free veggie pasta nirvana. Turns out whoever wrote this didn’t actually test it because what emerges following said treatment is squidgy, schmooshy primordial slime. Even the most fanatical vegetarian, fresh from a 4-week hunger strike, is not going to touch the stuff.

Like the real deal, fake pasta wants to be al dente and in the case of baby marrow spaghetti, seriously al dente, which means flash stir-frying for mere seconds. Much like those starlets, baby marrow wants a bit of makeup. Nothing that garlic, capers, lemon zest, chilli, herbs and a kiss of fragrant olive oil won’t fix. This is quick (as in less than 5 minutes), healthy (as in I can’t believe I’m eating it) and tasty (as in I can’t believe I’m loving it).

Heat a thick-bottomed frying pan until very hot. Add the olive oil and after 10 seconds the courgette spaghetti, chilli, lemon zest and garlic. Stir fry for just a few seconds. I like mine very crunchy so fried it for 30 seconds, go for a minute if you want it softer but no longer. Add the parsley, a pinch of salt, a squeeze of lemon juice and the capers and toss through. Plate up straight away, crumble over some feta and give it a last loving glug of olive oil. This will serve one as a veggie main, and two as a veggie side. See Tips, Tricks and Trivia below for more ideas with this super fast courgette spaghetti recipe.

More nifty ideas for this recipe

2) You can leave out the chilli and replace it with plenty of freshly ground black pepper. The kick of pepper against the lemon and feta is lovely. Just use lots!

3) If you pockets are deep, luxe this recipe up with a few marinated artichokes. It works brilliantly.

When I can, I buy proudly local and one of my favourite affordable go-to olive oil choices is invariably one from the Greenleaf Olive Company. This family-owned and run olive estate near the lovely village of Malgas close to Swellendam was founded with the vision of offering South African consumers international standard extra virgin olive oil at a price that won’t break the bank.

My local Checkers stocks it and the prices invariably compare very favourably with the nastier stuff that’s imported by the hectalitre from places like Spain. The GOC makes two extra virgin olive oils, a gentle one called Greenleaf and a slightly stronger one called Saint Sebastian Bay. With a recipe as simple as this courgette spaghetti you really want to pack in the flavour, so I used their Saint Sebastian Bay here.

I love the value, I love the quality and I love the fact that their bottles come fitted with a super handy little pop-up pourer built into the cap. So very clever. 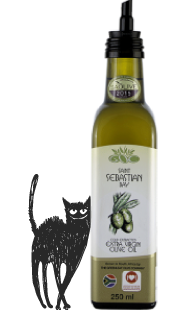