Occasionally I get the chance to escape my office just shy of five. I close the door behind me and hit the streets for a gentle stroll with my imaginary dog (Merlot won’t tolerate a real one).

One notices many things on these lazy constitutionals. My neighbour’s sweet peas will be blooming soon. The people a few houses over have painted – a pretty French blue. The ‘Mavericks’ plane is once again circling the burbs. And then I wonder…

I wonder about the women who work there and what they think of their customers (or are they called clients?).

I wonder how effective this form of advertising is (surely aeroplane fuel can’t be cheap). Do frustrated businessmen sitting in peak hour traffic spot the plane and think “Mavericks! I say, now there’s something to do tonight. Best call the wife and tell her not to wait up”?

A radio ad, for Mavericks or one of its competitors, proclaims that “a gentleman knows”. It makes me smile, but mostly it makes me wonder – just what exactly is it that a gentleman supposedly knows?

My Oxford Complete Wordfinder describes a maverick as “an unorthodox or independent-minded person”. I figure the average married bloke has to be pretty ‘independent-minded’ to act on this particular airshow.

A maverick in the kitchen, now there’s a thought. One of my favourite pasta treats is good ol’ American-style spaghetti and meat balls. I’ll eat pretty much anything as long as pasta is involved. But I really love this recipe, as I give it a proudly South African twist – with meat balls made with boerewors. Unorthodox enough?

Fry the onion in 3 tbs olive oil until soft. Add the garlic, paprika and chilli and fry for a further two minutes. (Take care not to burn the garlic!)

Add the tomatoes, sugar, salt, water, origanum and bay leaves. Cover and cook over a low heat for 20 minutes. If it gets too dry, add another tablespoon or two of water, but take care not to add too much, this is a thick sauce.

While the sauce bubbles away, squeeze the boerewors filling from the casing. Shape into equal-sized small meat balls and fry in 3 tbs olive oil until nicely browned.

Once cooked, add the meat balls to the sauce, taste for salt, remove the bay leaves and add a grinding of black pepper. Stir through and it’s ready. Serve with your favourite pasta (I used penne but, to be honest, spaghetti is top of my list). Sprinkle with parsley and truckloads of parmesan or pecorino.

If you (shock, horror) can’t get boerie…

If you’re in far flung countries and boerie is sadly out of reach, you can use any other quality sausage such as Toulouse for the meat balls.

If you’re going to make your own, try a 50/50 beef and pork mince mix instead of just beef.

However you choose to flavour it, add a generous handful of grated parmesan or pecorino to the meat ball mixture to make it extra tasty and juicy.

A tomato-based pasta goes really well with Sangiovese, as this cultivar has a fresh acid backbone that compliments the acid of tomato well.

Splattered Toad’s 2012 Shiraz/Cabernet Sauvignon is a good choice if you prefer something more local.

It has a gorgeous deep colour, wonderful red berries on the nose and plums on the palate. You’ll be doing good too, as R1 of every bottle sold is donated to save the Western Leopard Toad. 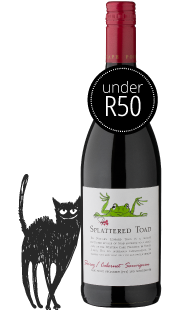