Say stollen and I immediately think Christmas and German. But the Dutch also have a strong stollen tradition, both at Christmas and Easter. For me stollen has always been rather like push-up bras and the utterings of politicians just before an election – big on promise, short on follow through. But a recent commission to churn out a couple of Easter stollen for a Dutch commercial had me rethink this old bread/cake-like treat.

So I made it the way I think it should be – packed to the rafters with fruit and warming spices. The Dutch tend to soak their fruit in rum. I made it local by soaking mine in rooibos tea and brandy. I did include the marzipan centre the Dutch traditionally use, but if you loathe the stuff, I think it will be just as nice without.

Place the cake mix (I used Safari Sundried Cake Mix) in a bowl and add the rooibos tea and brandy. Set aside to soakd for at least an hour. Add the flour to a large bowl along with the sugar, spices, yeast, milk and eggs and mix until combined. Knead for 5 minutes. (Dust your hands with some flour if it is very sticky.) Place dough in a large clean bowl lightly painted with cooking oil. Cover with cling film and set aside in a draft-free warm corner to prove for one hour.

In the meantime prepare your marzipan sausages. Marzipan is tricky and sticky. The easiest way of shaping it into a roll, is to place it on a piece of cling film and cover with another. Use your hands to press the marzipan into a rough sausage shape, then begin to roll it until you have an even roll about 3cm in diameter. The marzipan won’t stick and your hands won’t get icky! Place the wrapped marzipan roll in the fridge until you need it.

Once the dough has proved, knock it back and add the salt, cherries, almonds, lemon zest, drained fruit mix (press it in a colander to remove excess moisture) and soft room-temperature butter. Mix to combine. Divide the dough in half. Dust your work surface lightly with flour and shape the dough into two rectangles. Cut the marzipan in two sausages 4cm shorter than the length of the rectangle. Place a marzipan sausage in the middle of each rectangle then fold over the sides. Tuck the dough ends in neatly (like tucking in a baby) until you have a neat long oval.

Place loaves on baking trays lined with baking paper and cover with damp tea towels. Allow to prove for an hour, then bake in a preheated oven at 200 degrees Celsius until cooked through. Paint the stollen with melted butter when they come out of the oven. You need to paint them repeatedly as the butter soaks in and makes the stollen moist. Dust the stollen with icing sugar after the final painting. Serve on a lovely plate and dust once again with icing sugar for the pretty just before you serve. Eat this Easter stollen with good coffee for breakfast. Serve it midmorning for Easter tea. Or add a glass of something fortified and sweet mid afternoon and it becomes a pretty perfect Easter treat. See my wine recommendation below. Here’s wishing you and yours a blessed Easter.

More options with this recipe

Pierre Jourdan’s Ratafia, 100% Chardonnay fortified with brandy, is the perfect sweet treat with this.

Serve it ice cold in your best crystal. 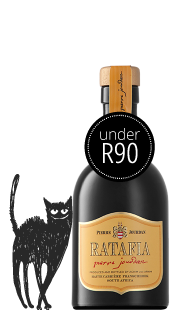