‘Never start a road trip with holey underwear.’ I’m not sure why she had this obsession or what she thought would happen if I did, but this is pretty much the only piece of advice I can remember my darling mum ever doling out.

Personally I would have found something like ‘tackle big problems in small bits’ more useful. That, or maybe something like ‘opportunity whispers softly, so listen up honeybuns’. Having been around the block a couple of times now, what would my advice be to anyone willing to listen? Probably ‘never let them see you sweat’.

It applies to pretty much any situation I can think of. Job interview? Don’t let them see you sweat. First date? Meeting the in laws? Court appearance? Works for all of ’em. But nowhere is this more important than in the kitchen. So what if a dish doesn’t turn out perfectly? Put on a fab dress, bright lipstick and your best Domestic Goddess smile.

Of course a bit of forethought makes it easier to be a fabulous DG, so I like having things in my fridge and freezer that I can haul out at short notice and turn into something seemingly impressive. Things like my red onion and bacon marmalade. It will keep in the fridge for two weeks (but honestly, it never lasts that long). Spread it on bruschetta and top it with generous shavings of aged parmesan cheese. Dollop it on bread, cover it with a generous handful of grated mature cheddar and in the Snackwich it goes. Toasted, cheesy, gooey awesomeness.

And if you want to be just a little bit fancy, serve it on pastry crackers with gorgonzola cream cheese mousse…

Slice the bacon and fry in the oil until brown and starting to crisp. Remove bacon and drain all but one tablespoon of the fat. Turn the heat right down and cook the onions until translucent (do not burn them). Add the garlic and fry for a further minute. Add the bacon to the onions as well as the chilli, thyme, brown sugar, vinegar and coffee. Cover and cook over very low heat for an hour to an hour and a half until it’s thick and jammy. (Note: You’re adding very little liquid, but it’s sufficient if your heat is low enough as the onions will release moisture as well.) Remove from heat and allow to cool to room temperature.

To make the mousse, mix together the cheeses with the milk until it’s smooth and soft. Add the salt and pepper. Whip the cream and carefully fold it into the cheese mixture to retain as much of the air as possible. Refrigerate.

To make puff pastry crackers, roll puff pastry out and use a cookie cutter to cut out small circles. Place on a baking tray lined with baking paper, top with another sheet of baking paper and weigh down with another baking tray. You want the flaky layers of puff pastry, but not the puff, so I increase the pressure with a heavy ovenproof dish on top of the top baking tray. Bake until golden and crisp – about 30 minutes. If you are using phyllo pastry instead (actually my preference), sandwich together four sheets of phyllo pastry, brushing each sheet with melted butter before you add the next. Brush the top layer with melted butter, sprinkle with poppy seeds and cut into squares. Place squares on a non-stick baking tray and bake until golden and crisp – about 10 minutes. Serve with the mousse and marmalade. OR, go the real easy (and just as delicious) route and serve this with mini digestive biscuits (to be found in the checkout isle at any Woolies food store).

Muscat de Frontignan has a long history. Traditionally a sweet wine made from Muscat grapes, it hails from the town of Frontignan in the Languedoc-Roussillon area of southern France. In its heyday it was a great favourite of the likes of philosopher, Voltaire, and the American president, Thomas Jefferson. Today’s Muscat de Frontignan is still honey-sweet, but it’s also much fresher and lighter than way back when.

Serve it ice cold in small glasses. It’s gorgeous with desserts that contain a touch of spice like fruit cake, with berries and nuts, with gorgonzola cheese or with duck and chicken liver, whether it be in a paté or a terrine.

My choice with this is Leopard’s Leap’s Culinaria Muscat de Frontignan. It’s the most gorgeous salmon pink colour and has loads of rose water and Turkish Delight on the nose as well as a touch of lemon and litchi.

Sweet but very fresh, Leopard’s Leap’s Muscat de Frontignan has a relatively low alcohol level of 11.5%. Serve it ice cold as the sun sets! It’s available at the estate or online for only R72 a bottle. 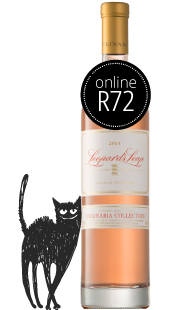