There’s a little game I like playing. It’s called ‘Spot The Meat’. No, this is not as crude as it sounds. I’m referring to pie here. You know, the kind you get at the hot counter in the supermarket deli section. Or, if you’re truly desperate, at filling stations.

Bite into it and you get gooey, oozing not-awesomeness. Visually it’s like what I imagine I would get if I added some gelatine to dirty dishwater. They do of course try to throw us off by adding some solid bits. But I think it’s knee of gnat, that and maybe some ear of hobbit.

The thought of putting a R140-a-kilo piece of rump or sirloin steak in a pie makes me shudder. My pockets simply aren’t that deep. So instead, I opt for a cheaper cut that will still deliver a rich, deep beefy taste – wonderful shin at half the price of steak. I also don’t put beef kidneys in. I prefer lamb’s kidneys. And I use store-bought puff pastry, because really, who has the time?

The shin has to cook for a while, so I start with the beef and only add the kidneys much later. (Few things worse than overcooked kidneys or liver.) Brown the meat in the vegetable oil. You want it really nice and caramelized as this builds the beefy flavour of this dish.

Remove the beef, turn the heat down and add the shallots the pan. Fry them, stirring thoroughly so all the brown meaty bits are lifted from the bottom of the pan. Once they’re soft, add the meat back to the pan along with any of the resting juices. Add the flour and stir through. Cook, stirring, for a minute. Now add the water, beef stock cube, thyme and pepper. Stir for a minute or two until the flour starts thickening the liquid nicely and it’s velvety smooth. Then cover, turn the heat right down and simmer until the shin is tender. Forty minutes should do the trick.

In the meantime clean your lamb’s kidneys. Now if you’re not familiar with kidneys, don’t fret. It’s really super simple. Use a sharp knife to cut them in half lengthwise. Inside you will see a knobbly, gristly, fatty white bit with what looks like tentacles anchoring it to the kidney. You don’t want to eat this. I find the simplest way to remove it is with a small pair of sharp-nosed scissors. Simply pull on the knobbly white bit firmly and cut away the anchoring ‘tentacles’ leaving as little as possible of them in the kidney. These days most kidneys come without their outer membrane, but it this filmy layer is on the outside of the kidney, you’ll spot it easily. Just pull it off. Voila! One clean kidney.

Once your shin is soft, it’s time for the kidneys. Slice them up to be similar in size to your shin cubes. I do not like throwing them in just like that. Instead I briefly fry them in some sunflower oil to caramelise a bit on the outside. You don’t want to cook them through, just give them nice colour. Then in with the shin they go. Tumble the lot into a pie dish. Cover with the puff pastry and seal the edges of the pastry onto the pie dish by crimping (basically pinching) it with your fingers. Paint pastry with the egg, then make a slit in the top of the pastry for the steam to escape. Into a hot 200 degree Celsius oven it goes straightaway. Bake until the pastry is cooked through and golden. It takes about 30-40 minutes. Serve this steak and kidney pie immediately with some buttered, minted peas. (TOP TIP: you can make this meat filling the day before and chill it in the fridge. When you get home from work, hungry, cold and bushed, simply pop on the pastry and bang it in the oven. Thirty minutes later you have a domestic goddess meal that’s good enough to entertain with!)

If kidneys really aren’t your thing…

You can replace the kidneys in this recipe with 600g button mushrooms. Simply fry them in butter until brown and then add them to the meat.

With this pie I want a red wine. Not a serious one high in acids or tannin. No, I want something fruity, soft and round. This calls for a Merlot. A great fave is Perdeberg’s.

It’s wonderfully juicy and fruity with notes of berries, spice and plum. This is by no means a larney or award-winning wine. It’s a cheap-as-chips, uncomplicated everyday wine. 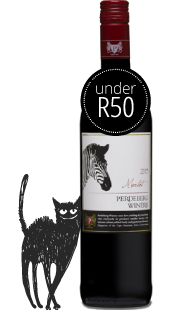