Tuna salad with a French twist

Weather wise the Cape always lags behind the rest of the country by a good month. So while everybody upcountry is swimming, I’m still turning my electric blankie on at night. But now summer has finally made its way to Cape Town too, and I’m thrilled as a 10-year-old on the last day of school.

Gone is my craving for stodge – salads are the order of the day. But they really do need to be interesting if I’m going to bother. Take this tuna salad. There’s no mayo in sight, nor any lettuce. Instead I turn to Provence for inspiration, and use many of the ingredients one would normally find in a traditional Nicoise salad. Of course they’re dressed up differently.

The anchovies are melted into extra virgin olive oil along with loads of garlic to form the basis of a knockout warm salad dressing. The traditional olives are chopped up and go into the dressing too, along with loads of parsley, baby capers and a pinch of chilli. This dressing is so punchy that I sometimes simply stir it into warm spaghetti and call it dinner. Pour it over basic veggies and tinned tuna and the dressing turns an otherwise average tuna salad into something rather jolly.

Combine the pickle ingredients and stir to dissolve the sugar. Then add the onions. Allow it to stand for 20 minutes to give the onions a light pickling before draining. Smash the garlic cloves with the side of a knife to break open the skins, but don’t peel them. Add the olive oil to a pan along with the garlic cloves and infuse over very low heat for 5 minutes. Remove from the heat and set aside for a good 20 minutes or more to flavour the oil. Then place the oil back on the heat and add the anchovy fillets and chilli. Stir until the anchovies break up and disappear into the oil. Take off the heat and remove the garlic cloves. Stir in the capers, chopped olives and parsley. Taste dressing and add salt if necessary. Whether you add salt depends on how many anchovy fillets you use, as they are quite salty.

Boil the green beans super quick – as in for mere minutes, you want them decidedly al dente. Shock the beans by immersing them in ice water, then drain and set aside. Boil the potatoes until soft and halve. Roast the tomatoes at the same time. Simply give them a splash of oil and place in a 150 degree Celsius oven for 10-15 minutes until blistered. (You could also keep the tomatoes raw if preferred.) The pine nuts go in the oven in a separate bowl until they’re toasted to a light golden brown. Keep and eye on them, they turn quickly and a burnt nut has never been a pleasant thing!

Assemble the salad ingredients, spoon over the dressing, scatter over the pine nuts and add a few small basil leaves for extra punch. If you happen to have nasturtiums in bloom in your garden, pretty your tuna salad up by adding a few of those too!

More options to try with this salad

1) A classical Niçoise salad mostly has eggs in it. You could add boiled eggs or poached eggs to this tuna salad and turn it into a real filling meal. And don’t just think hen’s eggs. Teeny quail eggs are perfect if you want to serve this as an elegant starter for fancy entertaining.
2) Green peppers would be a good addition if you love them.
3) And why not ditch the tinned tuna and replace it with thin slices of fresh tuna briefly seared in a hot pan with olive oil? Yum.

New on the shelves

My selection with this would be a crisp light white. All that healthy summer living and stuff – which admittedly I mostly do so I have more calories spare for all the Christmas mince pies I know I’m going to eat! I have written about Van Loveren’s Light Skinny White before. It’s one of my favourite lower alcohol whites on the market.

But now they have gone one step further – with a de-alcoholised (yes, it’s a word) Sauvignon Blanc! It’s called Almost Zero, and with an alcohol content of less than 0,5% that’s pretty fitting. A low-alcohol white is normally in the 8-9% range and a normal white mostly anywhere from 12-14%, so this is phenomenal. As a result it also has 75% fewer calories than a normal white!

So what it this then? It’s made from grapes and has hardly an alcohol, so is it a juice? Definitely not. But I would also not really call it a wine, even though strictly speaking I suppose it is. I would rather call it a wine alternative. What does it taste like? Like nothing else I’ve ever encountered so it’s hard to describe. There are hints of apple, citrus and tropical fruit and it is very, very light.

This is a good choice for the festive season if you want to be part of the happy times but 1) drive safely and 2) not add too many extra calories to what is already a culinary train smash. It’s also a good option to serve to folks who don’t normally enjoy ‘wine’. Try a bottle and see if Almost Zero is the safe summer tipple for you this December. 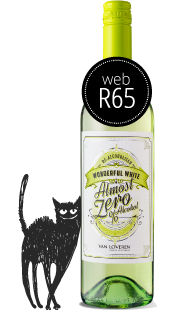