I’ve been fairly devastated for the past month or so – ever since I found out that I will not be frying myself to a crisp on January 2nd. See, that’s the day the traditional New Year cricket match normally starts at Newlands stadium.

Capetonians rock up in their thousands with cooler bags, 2-litre bottles of Coke and contraband sachets of seriously bad booze hidden on their person in places I would rather not think of. I don’t smuggle mine in, I buy it there – beer in half-litre plastic cups. This is how I know I have class.

We sit in the blazing sun all day long, clap, shout, do the Mexican wave and generally have a total blast. When the teams retire for lunch in the air-conditioned splendour of the Members’ Stand, the crowds hit the takeaway stands like a tidal wave.

I eat the same thing every year – a foot-long double hot dog loaded with fried onions and dripping with both mustard and tomato sauce. Having grown up in a metric society, my understanding of the extent of a foot is rather vague, but it sounds marvellously excessive.

From a culinary perspective, it’s seriously suspect.  You couldn’t pay me to eat this any other time. But at the cricket, in relentless sun, with a warm beer, it’s obligatory.

Sadly I won’t be stuffing my face with a ‘foot-long’ at Newlands come 2 January 2014. Because apparently (if the papers are to be believed) the head of Cricket South Africa, Haroon Lorgat, has antagonised the Indian cricket administrators somewhat – and they have chosen to show their displeasure.

Now my mum taught me that religion, sex and politics are subjects best avoided by any lady, so I won’t carry on too much about the politics of international cricket. All I know is that thousands of seriously disappointed fans will be at a loss on January 2nd.

I’ll be placating myself with a beer and this slightly more gourmet version of a hot dog – Knackwurst with sweet and sour coleslaw and a garlic-mustard mayo. It will be small recompense, but at least it’s something. I think I’ll call it The Haroon Lorgat.

Mix the mayonnaise, Dijon and garlic and set aside so the flavours can develop.

Lightly toast the yellow mustard seeds and fennel seeds in a dry pan over a medium heat. (Take care not to burn it, a minute or less will do the trick.) Mix the mustard and fennel seeds with the olive oil, vinegar, honey and a generous pinch of salt and whisk with a fork to emulsify.

Slice the cabbage, onion and carrot paper-thin. (I use a mandoline.) Stir the vinaigrette through the veggies.

Cook the sausage any way you want, (boil, pan fry or braai) and serve on toasted bread rolls with the sweet and sour coleslaw and loads of mayonnaise.

Pork loves fennel. You can finely chop a fennel bulb and add it to the coleslaw. Or add some dill and finely sliced radish.

If you prefer a bit of a kick, simply add more Dijon to the mayonnaise, or add a teaspoon of hot English mustard.

This hot dog deserves an extra special beer. My choice is Cape Brewing Company’s Amber Weiss. I’m no expert, but some pretty rating judges thought it mighty fine and awarded it “Best Beer” status at the recent Cape Town Festival of Beer (the largest beer festival in the Southern Hemisphere). I tried it and thought it accessible – aromatic and quite feminine actually.

Now I know SAB rules the roost, but they really don’t deserve all your beer money, so make an effort to discover your smaller local breweries and support them. 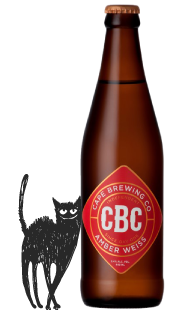