My first encounter with sherry was at university. It was memorable – for all the wrong reasons. Back then cheap and lots of it were pretty much my only considerations. You can see where this is going. It almost ruined me for sherry. Kinda like my visit to a major (can’t name names) processed-meat producer’s plant in Germiston round about the same time. I haven’t touched polony since. But, unlike with polony, I did eventually come around on the whole sherry thing. And that’s fortunate, as we make some truly excellent ones.

Of course we can’t actually call it sherry anymore because, rather like a Jack Russell with a T-bone, the Europeans want it for themselves. These days only fortified wines from a region near the town of Jerez in Spain may be called sherry.

Our answer to this naming quandary? Pale Dry, Medium Cream and Full Cream. Yup, when you see this on a bottle, it’s a sherry in drag. Last Thursday I hoofed it into town to Society Bistro in Orange Street where the lovely folks from KWV were putting on a showcase of their ‘not sherry’ wines paired with food. Salted hake with a coconut crust and minted pea purée came with KWV Cape Pale Dry (the name says it all, it’s dry). Next up was gorgonzola soufflé with chorizo paired with the slightly sweeter KWV Medium Cream . Then Wagyu bresaola which was a bit of a revelation paired with KWV’s sweet (there’s nothing wrong with sweet folks, as long as it’s good) Full Cream.

They may be fortified (to about 17.5% alcohol, compared to the 12-14% of most wines) but here’s the thing – these are nevertheless wines, which makes them not only the perfect tipple with food, but wonderful to cook with too. Don’t think purple-rinse little old lady when you think of them. Think sexy Spanish Señor/Señorita whispering sweet nothings as they feed you tapas on a sultry, sweaty Barcelona night. Now that’s more like it.

With Javier Bardem firmly in mind, I opened a bottle of KWV’s Pale Dry a few days later and used it to cook up this super quick and easy prawn and chorizo tapas dish. Naturally I drank some too.

Until next time
Lizet

P.S. I also tasted some rather fine KWV Cape Ruby and Cape Tawny (Port in drag). But that’s another recipe idea for another time. Watch this space!

Before we start, a little caveat: Good ingredients are always a good idea, but when a recipe has so few ingredients, even more so. Do buy the absolutely best chorizo and prawns you can! Let’s cook…

Heat 4 tbs olive oil and gently fry the chorizo slices for two minutes. Remove and set aside. Add the onion and fry, over a lowish heat, until the onions are soft. Add the garlic and fry for a minute. Add the paprika and chilli flakes in you’re using them. (Many recipes add the paprika earlier, but I think it burns easily and then it’s bitter and awful, like my upcoming tax return.) Turn up the heat and add the prawns and chorizo. Cook until the prawns are done (they’ll start curling and be firm – take care not to overcook, this only takes a few minutes). Add the sherry and cook on high heat for 30 seconds.

Drizzle with some more olive oil, scatter with loads of chopped parsley (about 2 tablespoons) and serve instantly in small bowls for folks to pick at. This is not a meal. It’s meant to be a small snack Spanish-style and this quantity will serve four. Serve it with small bowls of green olives, my roasted peppers and, because I just love, love, love it, some toasted country bread drizzled with olive oil. If you’re (shock, horror) banting, simply leave out the bread.

Fry one finely chopped onion in olive oil until soft. Add a crushed clove of garlic and one teaspoon of fresh thyme and fry for two minutes over lowish heat. Add 200g chicken livers and fry on high heat for a few minutes until they’re brown on the outside but still slightly pink inside. Deglaze the pan with a quarter cup ‘sherry’-style wine (I think the Medium Cream is perfect for this) and cook for a minute.

Tumble the livers onto a plate with some baby lettuce leaves, scatter over some toasted, chopped hazelnuts and serve immediately with a glass of Medium Cream to wash it down. This one too is perfect if you’re banting.

What do I drink with this? KWV’s Pale Dry of course. It’s delightfully dry with hints of butterscotch, honey, apricot and nuts. I prefer it cold.

If you’re not familiar with these fortified wines, you may prefer starting with something a touch sweeter. KWVs Medium Cream is a perfect introduction to the magic of ‘sherry’. 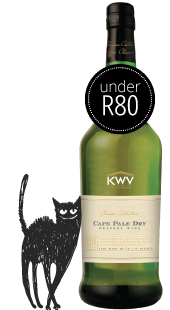